The Pullman Strike was the greatest uprising of working people in American history. If you haven’t listened to parts one through four of this special mini-series inspired by my book The Edge of Anarchy, I encourage you to do so. It sets the stage for what I’m about to describe. 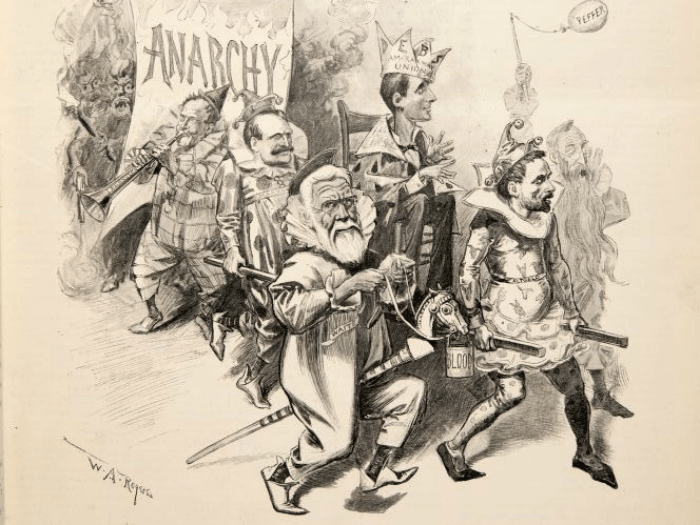 It all started in the spring of 1894 at the Pullman works on Chicago’s far South Side, one of the largest factories in the country. Workers there made rail cars, including the sleeping cars that the company was famous for that I describe in more detail in Part 3. Most of the workers lived in the adjacent company town. Their homes were owned by the company, which tried to control their lives both on and off the job.

Company founder George Pullman had cut employees’ wages that winter, but demanded that they continue to pay exorbitant rents for their homes. After the rent was taken out of their pay, many workers had only a few dollars to show for two weeks’ hard work. One employee’s check amounted to only two cents. He had it framed as an emblem of the company’s contempt.

But low pay and high rent were only the beginning of the workers’ complaints. The piecework Pullman demanded meant they had to maintain a frantic pace to make a decent wage. Foremen routinely abused workers. Company spies were everywhere, in the factory and in the town. Suspicion and resentment soon erupted into a strike.

George Pullman’s strategy was simply to close the plant and wait out his employees. Business was slow anyway, and his company was still taking in a steady stream of passenger fees from his sleeping cars.

The Pullman workers had joined the American Railway Union, the massive new labor organization started the year before by Eugene Debs, whose backstory I give in Part 4. It included all railroad-connected workers. That June in Chicago, the union was holding its first convention. Pullman workers appeared and asked for the members’ support for their strike. One of the most eloquent speakers was nineteen-year-old Jennie Curtis, a seamstress at the Pullman plant. She told the delegates: “We ask you to come along with us, because we are not just fighting for ourselves, but for decent conditions for workers everywhere.”

Continue reading The Edge of Anarchy Part Five: The Pullman Strike on the Unknown History channel at Quick and Dirty Tips, or listen to the full episode below.

The post The Edge of Anarchy Part Five: The Pullman Strike appeared first on The History Reader.