MGH, the Monumenta Germaniae Historica, celebrates its 200-year anniversary in 2019 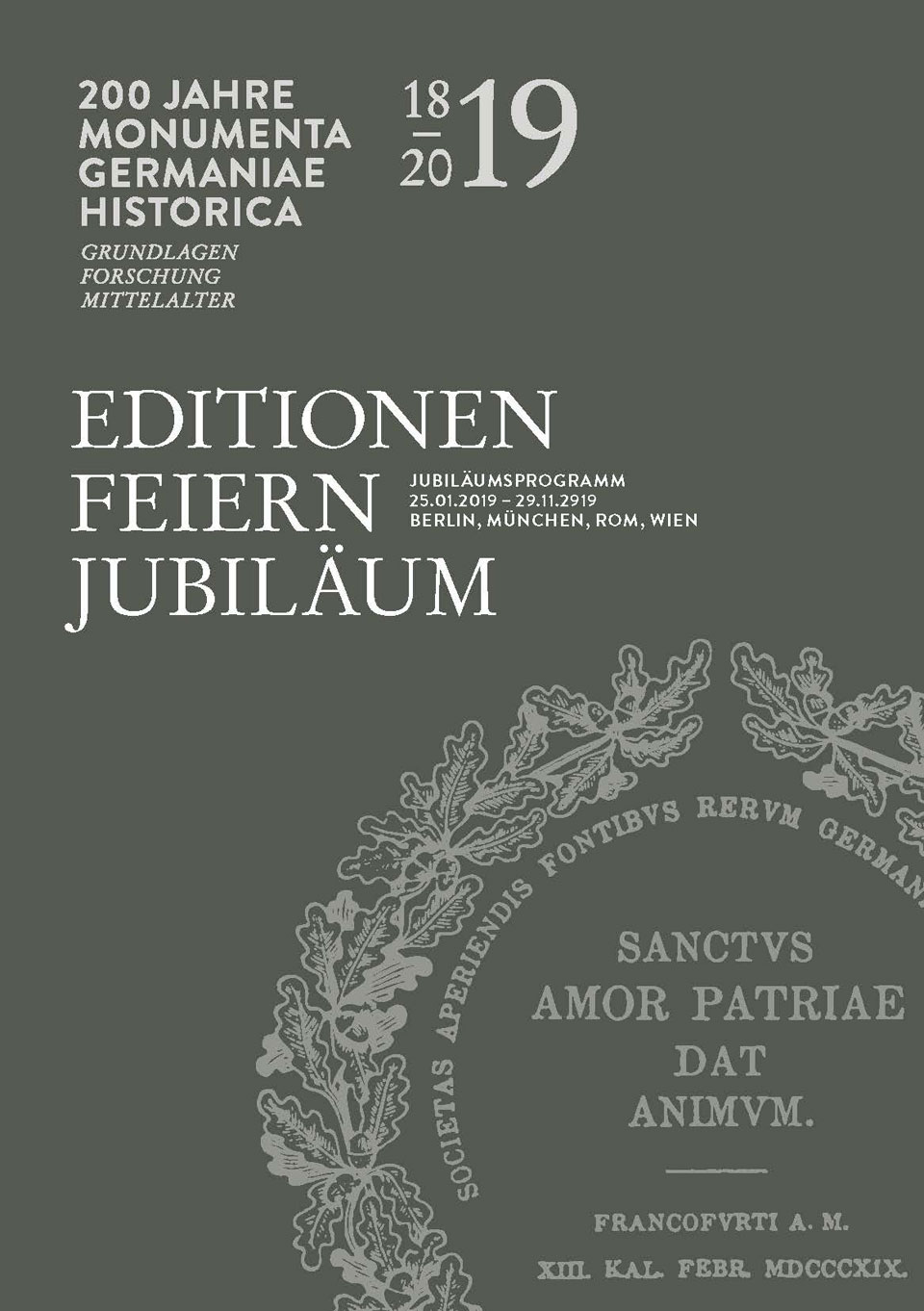 On the 20thof January 1819, Baron Karl vom und zum Stein (1757 – 1831) founded a publishing society in his apartment in Frankfurt, the Monumenta Germaniae Historica. The Baron was a Prussian Statesman, who worked diligently for the unification of Germany, the abolition of serfdom, furthering free trade and the establishment of local administrative systems. As such, he was a true child of the enlightenment. In due course, though, he became gradually more inspired by British political thinking and following this, in the Prussian and Austrian rising against Napoleon. In 1809, Stein fled from Berlin to end up in Bohemia in the Austrian Empire. In 1812 he received an invitation to Russia. From there he campaigned to keep the Russian Tsar form entering a treaty with Napoleon. This ultimately led to the defeat, imprisonment, and exile of the French emperor. During the Vienna Congress, he was sidelined by his nationalist Prussian thinking. This led to his engagement in the furthering of historical research and text edition, and his foundation of the Monumenta.

The first volume was published in 1826 under the editorial auspices of Georg Heinrich Pertz containing an edition of Carolingian Annals. In 1935, the society was taken over by the Nazis and renamed “The Reichsinstitut für ältere Deutsche Geschichtskunde”. In 1945, the institution was dissolved. In 1949, the institute was revived, now in Munich. In 1967, the institute together with its invaluable library and collection was incorporated in the Bavarian State Library. In 2004, the numerous editions were digitized; an invaluable service to the scholarly community of medievalists.

The celebration of the upcoming anniversary, however, takes place at a time when historical skills are busily deteriorating. Thus, between 1997 and 2011, the teaching of codicology, palaeography, epigraphy, diplomacy, numismatics, heraldry, sigillography, and record-keeping, lost a third of its university chairs in Germany[1]. At the same time, the availability of sources in a digital format calls for a renewal of the competences to handle the diverse texts and variants.

To name one example: When the Salic Law was finally edited and published by Karl August Eckhardt and MGH in 1962, the edition was based on the work of several generations of German historians. As such it was based on the idea, that it was possible to construe one authorised edition of the original text in its three versions (D, E, and S). Now, however, any serious work on the character and use of the Salic Law would have to acknowledge that we have at least 91 manuscripts (not counting fragments), all representing the law in its diversity. Comparative analysis at quite another level is now possible because of the digitisation of these manuscripts, calling for a renewed fostering of the traditional competencies listed above.

[1]Diskussionsforum: Historische Grundwissenschaften und die digitale Herausforderung. This Forum holds 28 contributions concerning the status of these disciplines as well as the shift from analogue to digital editions of sources.

Honouring the many international scholars, who are involved in the on-going editorial programme, MGH celebrates the anniversary with a series of events in Vienna, Berlin-Brandenburg, Munich, and Rome. Also, during the anniversary, a bicentennial publication – 200 Jahre Monumenta Germaniae Historica, will appear in print. Read the programme for the festivities.

The digitized collection of MGH

Also, the later text editions are made available as downloads from openMGH