Loves, you may have had the pleasure of being alerted, in the Guardian (which is a SWERF and TERF-ridden rag of a paper, but hey-ho), to the important findings of Professor Sarah Rees Jones and her team at the University of York’s extremely important discovery of the story of Sister Joan of Leeds.

Joan of Leeds, in an OG proof of the fact that you cannot defeat a bad bitch (you just cannot do that), in that in the year of our Lord 1318 got Archbishop William Melton of York’s attention to the point that our boy had to write out a note…

To warn Joan of Leeds, lately nun of the house of St Clement by York, that she should return to her house…

See, your man was straight up MAD that Joan had…

…impudently cast aside the propriety of religion and the modesty of her sex … [and] … out of a malicious mind simulating a bodily illness, she pretended to be dead, not dreading for the health of her soul, and with the help of numerous of her accomplices, evildoers, with malice aforethought, crafted a dummy in the likeness of her body in order to mislead the devoted faithful and she had no shame in procuring its burial in a sacred space amongst the religious of that place…

Why? Well, because she…

…turned her back on decency and the good of religion, seduced by indecency, she involved herself irreverently and perverted her path of life arrogantly to the way of carnal lust and away from poverty and obedience, and, having broken her vows and discarded the religious habit, she now wanders at large to the notorious peril to her soul and to the scandal of all of her order.

In other words, Joan was out to catch some D and she didn’t care if she had to fake her own death and make a dummy to replace her during burial so she could sneak out of her nunnery in order to do that.

Nuns, being women, were no exception to this rule. Their vow of chastity was meant to keep them off of the D and indoors where they couldn’t act like complete dick pigs, but so were women’s vows of fidelity during marriage and, well, you know how that tended to turn out. 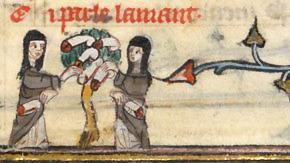