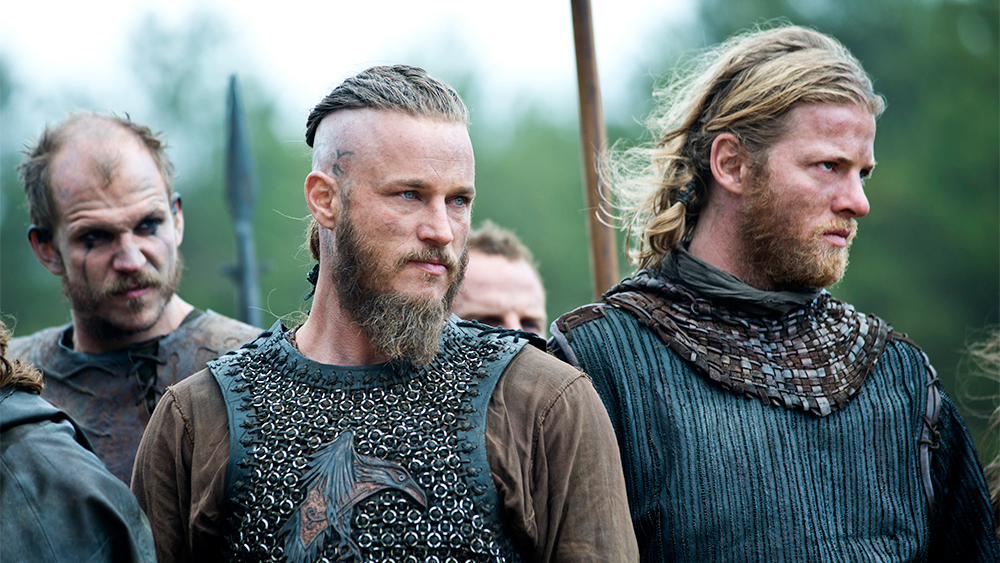 Ragnarr Loðbrók, to give his name the proper spelling, has become America’s favorite badass Viking, thanks to the History Channel’s exciting series, “The Vikings.” But who was he really? Dr. Elizabeth Ashman Rowe has the answers. Rowe is University Lecturer in Scandinavian History of the Medieval Period at the University of Cambridge in England and author of a scholarly study published in 2012, Vikings in the West: The Legend of Ragnarr Loðbrók and His Sons.

In the preface, she writes: “The Viking king Ragnarr Loðbrók and his sons feature in a variety of medieval stories, all of them highly dramatic.” In a French version, he is a noble king in Denmark, father of a fearsome Viking who ravages France. In an English story, he “wickedly inflames” his three sons with envy for the English King Edmund, provoking the Danish invasion of England and Edmund’s martyrdom.

Snorri Sturluson, subject of my book Song of the Vikings, wrote one of the 32 known Icelandic tales about Ragnarr. To Snorri, Ragnarr was famous as the first Norwegian king to keep a court poet, or skald. He was “the conqueror who established the definitive boundaries of the Scandinavian kingdoms,” Rowe writes, “and the symbol of the ancient heroism that would be eclipsed by the new heroism of the Icelanders.”

Concludes Rowe, “In short, Ragnarr and his sons were ciphers to which almost any characterization could be attached”–as the History Channel has effectively proved.

Was there a real Ragnarr Loðbrók? Rowe says no: “I do not think that there was ever a historical figure known as ‘Ragnarr Loðbrók.'” Mostly it’s the nickname she’s leery of, noting that “the deeds and fate” of an “extraordinarily ferocious” Danish Viking known as Reginheri, who attacked Paris in 845, hanged 111 Christians, and died of illness soon afterwards, “may have given rise to stories about someone named Ragnarr, but there is absolutely no contemporary evidence that he was nicknamed Loðbrók.”

He didn’t get his nickname until after he died–Loðbrók first appears in two sources, one Icelandic and one from France, in about 1120–and there are several explanations of what it means.

An English writer in about 1150 said it meant “loathesome brook”–just what it sounds like. But in Old Norse, the nickname would have been understood as “hairy breeches” or “shaggy trousers.” The Icelander who wrote Ragnar’s Saga in the 13th century explained that Ragnarr got his nickname from the pants he put on to protect himself when fighting a poison-breathing serpent (or dragon): cowhide pants boiled in pitch and rolled in sand.

Professor Rowe has a better explanation. As I’ve mentioned, the real Ragnarr Loðbrók, the ferocious Reginheri, died of illness soon after attacking Paris in 845. And not just any illness. Reginheri died of dysentery. As one account in Latin explains, after Ragnarr returned to the Danish court of King Horik he suffered terribly from diarrhea: “diffusa … sunt omnia viscera ejus in terram” (which Rowe helpfully translates: “all his entrails spilled onto the ground.”)

Concludes Rowe: “I suggest that it was a similar report–one describing his diarrhea in terms of his feces-stained breeches–that gave rise to the posthumous nickname loðbrók. Ragnar’s Saga’s explanation ot the nickname loðbrók as derived from garments boiled in pitch comes startlingly close to reality, for one can imagine an onlooker at the court of King Horik telling someone later that Reginheri’s breeches looked black and sticky, as though they had been boiled in pitch.”