On the Fourth of July, 1937, a group of Americans gathered in the town of Yaphank, Long Island, to celebrate the country’s birthday. Many of the traditional elements of Americana were present, including picnic baskets, beer, and the inevitable fireworks. Yet there were some unusual elements as well. Some of those in attendance were in uniform, but not the uniform of the U.S. Army. More than 300 men in silver-gray shirts with black ties and Sam Browne belts that passed over their right shoulders, and others in black shirts, goose-stepped past the stage and saluted their leaders with extended right arms. A huge swastika adorned the stage next to the American flag. The usual patriotic speeches focused not only on the United States, but also several of its soon-to-be-enemies. Cries of “Heil Hitler!” and “Heil Mussolini!” filled the summer air. 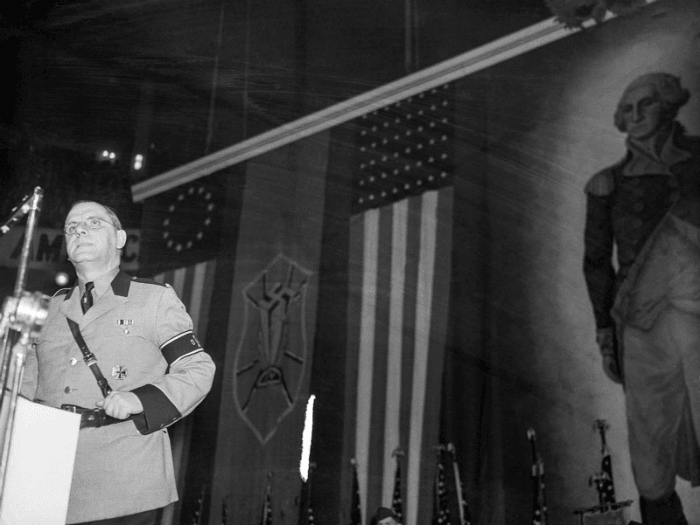 This was the Fourth of July celebrated in the style of the German American Bund, once the country’s leading organization for German sympathizers and Nazi imitators. Though nearly forgotten today, the Bund once boasted a nation-wide membership in the thousands and had chapters in nearly every major American city. Millions more saw newsreel footage of goose-stepping Bund members mimicking Hitler’s stormtroopers or read newspaper exposés about the Bund’s secret training camps for children and adults alike. In Washington, politicians and law enforcement officials wondered what the Bund’s leaders might be plotting.

Yet despite its undeniable popularity for some Americans, and the public outcry it generated, the Bund never came close to fulfilling the ambitions of its leaders. In part, this was thanks to the courageous infiltration of the group by an enterprising Chicago journalist who risked life and limb to expose what the Bund was up to. His name was John C. Metcalfe, and we’ll return to his story in a moment.

The German American Bund was founded in 1936 and led by a German immigrant—and naturalized American citizen—named Fritz Kuhn. In theory, the Bund was merely an organization of German Americans who wanted to stay in touch with their former homeland. In reality, the Bund had been created from the remains of an organization called Friends of the New Germany that had openly supported Adolf Hitler and his plans for the Third Reich. That organization was shut down when the German government decided it was too disreputable and might endanger Germany’s relations with the U.S. The Bund was therefore supposed to be a more respectable way for German Americans to stay in touch with their former country—but also show support for its new leader, Hitler.

In reality, the Bund’s ideology was more closely aligned with the Reich than its leaders wanted to admit. Fritz Kuhn himself was a World War I veteran who had won the Iron Cross. After the war he joined the Nazi Party and brawled with Communists on the streets of Munich. He later claimed to have been present for the failed Beer Hall Putsch that landed Hitler in prison. In 1923 he moved to Mexico and later settled in Detroit, where he worked for the Ford Motor Company. According to one account, he was fired from the job when management discovered him practicing political speeches while on the clock. (Relevant aside: Stay tuned to episode 4 of this miniseries to learn about Henry Ford and his obsession with Nazism.)

Continue reading Who Was Fritz Kuhn and the German American Bund? on the Unknown History channel at Quick and Dirty Tips. Or listen to the full episode below.

The post Who Was Fritz Kuhn and the German American Bund? appeared first on The History Reader.