A Dangerous Woman is Susan Ronald’s revealing biography of Florence Gould, fabulously wealthy socialite and patron of the arts, who hid a dark past as a Nazi collaborator in 1940’s Paris. Keep reading for an excerpt.

Florence, aged sixteen, thought of herself as La Parisienne, that gigantic statue representing modernity, fashion, and glamour at the Exposition Universelle of 1900. The statue, sculpted by Paul Moreau-Vauthier, was the exhibition’s focal point. All visitors walked into the Paris fairgrounds through the Porte Monumentale, where they were greeted by this female colossus, La Parisienne, in all her glory. She was modern, like Paris, stunningly beautiful, outfitted in Jeanne Paquin’s haute-couture gown. She was quintessentially French. She was no Marianne, the allegorical, martial, patriotic symbol of France. La Parisienne invited all visitors, French and foreign, to enter and see a new, contemporary Paris, released from the shackles of tradition and the scandals of the Third Republic, to revel in the excitement that Paris represented to the world in culture, invention, and science.

Florence saw herself as a living, breathing La Parisienne, modern, glamorous, sexy, a future Gaby Deslys, star of the Folies Bergère. Unlike Gaby, Florence wanted to find her feet in the rarefied world of opera. While she learned only about La Parisienne in school, Florence could easily relate to both La Parisienne and the designer of her haute couture, Jeanne Paquin. The House of Paquin was the rising star in the fashion world, noted for wooing away clients from the aristocratic, traditional designs of Gaston Worth. Despite Paquin’s short ascendency, she eclipsed the established, male House of Worth with her daring and innate feminine understanding of what women wanted to wear. Beautiful in her own right, Paquin had risen from humble origins to become first a model, then a designer, and finally the owner of her own fashion house. It was that kind of upward mobility that Florence admired and yearned to emulate, up to a point. Where Paquin was happy for her fashions to shine in the limelight, Florence needed the oxygen of the limelight shining directly on her.

By 1900, money, or the lack of it, had become a gradually determining factor in social status. While land ownership still mattered, and marked an enviable noble heritage, the landed gentry throughout Europe were finding the new, raw capitalism of the early twentieth century hard to fathom, and harder still to adopt. The titled aristocracy were on the hunt for American heiresses born to wealthy robber barons of the ilk of the Vanderbilts, Morgans, and Goulds; or even, if the need absolutely dictated, daughters born to manufacturing giants like Isaac Merritt Singer, inventor of the first evenly stitching sewing machine. 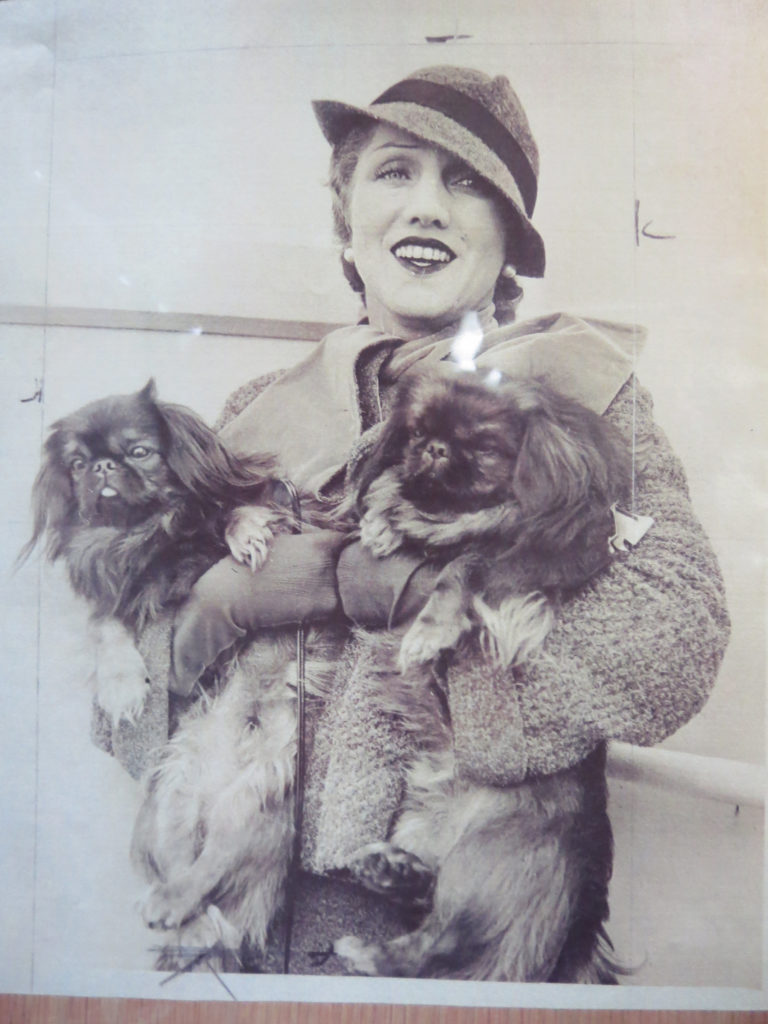 Florence Lacaze Gould aboard the SS Normandie in 1935 with two of her Pekingese dogs. Both she and Frank were devoted to the breed. (courtesy of the Library of Congress)

In Florence’s Paris, it was a commonly known fact that all Americans were equally unacceptable in society, but their money was a necessary evil to be envied and plundered, so European aristocracy could plow on regardless. It was the American search and need for belonging in European society, coupled with the European requirement for new money, that changed many heiresses’ and aristocrats’ futures. Consuelo Vanderbilt was coerced into her marriage with the Duke of Marlborough by her mother, saving Blenheim Palace and the duke’s other assets from oblivion. Marie Alice Heine, born in the French Quarter of New Orleans to a Jewish banking family, converted to Roman Catholicism to become the Duchess of Richelieu. When Alice was widowed as a young woman still of childbearing age, she remarried well, becoming Her Serene Highness of Monaco, Princess Alice.  Jennie Jerome, the first American-dollar “princess,” and mother of Sir Winston Churchill, also gave her inherited fortune to underpin her husband’s political career for the dubious pleasure of becoming Lady Randolph Churchill.

Florence ached to belong to the treasured circle of these elite society women, but despite her private school education, she lacked the money and connections to meet, much less marry into, such illustrious circles. While Charles Loeb toiled to obtain satisfaction through the California courts, Florence was, momentarily, relatively penniless. Dreams were one thing, reality quite another. Still, the sixteen-year-old was already a remarkable beauty, and knew it. Florence had also become a frightful snob—something everyone who met her remarked upon—and could not see herself living forever in obscurity, much less in poverty.

Certainly, Berthe instilled in her daughter an awareness that such beauty should provide Florence—and by extension her family—with an international passport to glamour, wealth, and happiness. As for the protagonist in the story Gigi, written by Florence’s near contemporary, the French author Colette, it was Florence’s duty to marry well and share her newfound wealth with the family. For Berthe, while it mattered if Florence’s future was that of a demimondaine or an opera singer or the wife of a millionaire, she was a practical woman. If Florence could not marry well, then a world-famous opera singer would be her next choice for her daughter. Failing that, Florence would need to consider becoming a successful demimondaine. 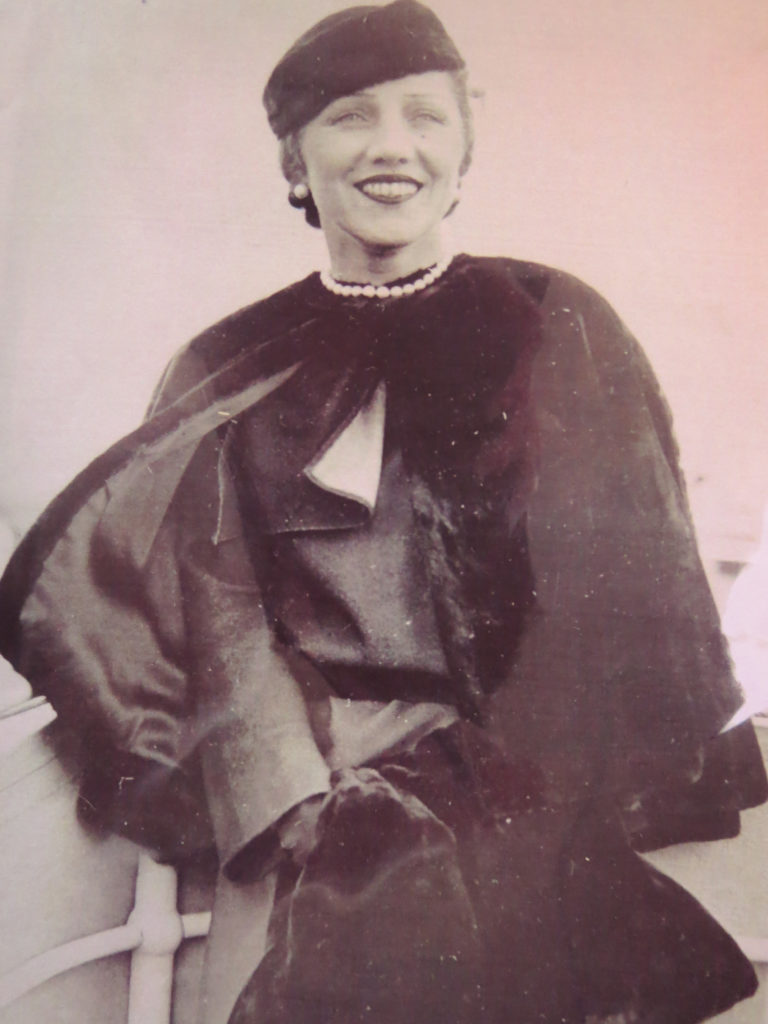 As captioned in the New York World-Telegram, “Mrs. Frank Gould, society leader in New York and Paris, arriving in New York aboard the Ile de France”, 1934. (courtesy of the Library of Congress)

The searing question was, could Florence marry well? Florence’s world was changing rapidly. By 1913, the first self-made millionairess was a Polish Jew, Helena Rubinstein. Rubinstein had become rich from her mail-order business, which sold face cream to sun-ravaged Australian women in the Outback. Now Rubinstein owned beauty salons in Melbourne, London, and Paris and was searching for a salon in New York. “Beauty is power” was an early Rubinstein advertising slogan, and Florence decided that her beauty might provide her big break into the international high-society set of Paris. While Florence thought she had the business sense to run an international company like Rubinstein’s, it was not, yet, her passion, and it remained an unproven skill for some years to come.

Society and glamour, on the other hand, consumed her every waking hour. Back then, glamour was not about cosmetics and a slash of red lips for Florence. That was for later, when it became the fashion. It was about power, sexuality, and the unadulterated pleasure it could bring her. It was about luxury and excess. It was about living without the conventions or expectations of classical femininity. Above all, it was about heady sensuality and reveries beyond the ordinary, creating her own boldness, her own world of risk and self-assertion, and tipping the scales of an unequal male society in her favor. If her beauty could give her a leg up into that society so she could create her own world of glamour, so much the better. Certainly, her other great asset—her singing voice—gave another string to her bow, creating an aura of the exotic, the dangerously alluring.

Even at sixteen, Florence was a young woman on a mission. She combed the society columns, soaked in every bit of gossip and news about le Tout-Paris—the city’s fashionable elite—and gleaned every crumb she could about the public and private lives of the salonnières (society hostesses) who might be susceptible to her charms. So, when she thought she was ready, Florence cajoled her old music professor into introducing her into the salon society. Alas, it seemed that the professor was found wanting in his connections to the salonnières whom Florence was determined to know. Perhaps, too, Berthe could no longer afford his lessons, and hence his failure to do as he was bid. But Florence would not be defeated. It seemed only natural that she should try to cultivate the American salonnières who had made Paris their home. Aside from her near neighbor Gertrude Stein, who was dowdy, masculine, and perhaps hideous to Florence’s beautiful green eyes, there were, fortunately, others.

Born and raised in the United States, SUSAN RONALD has lived in England for more than twenty-five years. She is the author of several books, including A Dangerous Woman, Hitler’s Art Thief, Heretic Queen, The Pirate Queen, and Shakespeare’s Daughter.