Since the summer of 1941, the Nazis had been mulling over how to implement Hitler’s ‘final solution of the Jewish question’ and in August of that year, they discovered a horrible possibility. When testing a delousing agent, Zyklon B gas, on Soviet prisoners of war at a prison camp in Silesia known as Auschwitz, they discovered that the noxious substance had the ability to kill all those who breathed in its fumes. In the winter of 1941, the chief of the German police and SS, Heinrich Himmler, summoned Auschwitz Kommandant Rudolf Höss to Berlin to answer what the Nazis considered to be the vital question of how best to achieve annihilation. On 20 January 1942, while newspapers focused on collecting woolen fabrics for the war effort and celebrating the successes of German engineering and the Autobahn, Himmler hosted the infamous Wannsee Conference. ‘Whatever Jews we can reach are to be eliminated,’ Himmler tells Höss, ‘without exception.’

The resolution the Nazis reach will require a cold-blooded alchemy of technical ingenuity and moral bankruptcy, and will be brought into being not in the cold swampy flatlands of Poland, but, in part, in a comfortable office in one of Germany’s most pleasant cities. An office with drawing boards and a view of the Ettersberg mountain—where middle-aged men wearing stiff white collars dream up horrors, each more demented than the last. 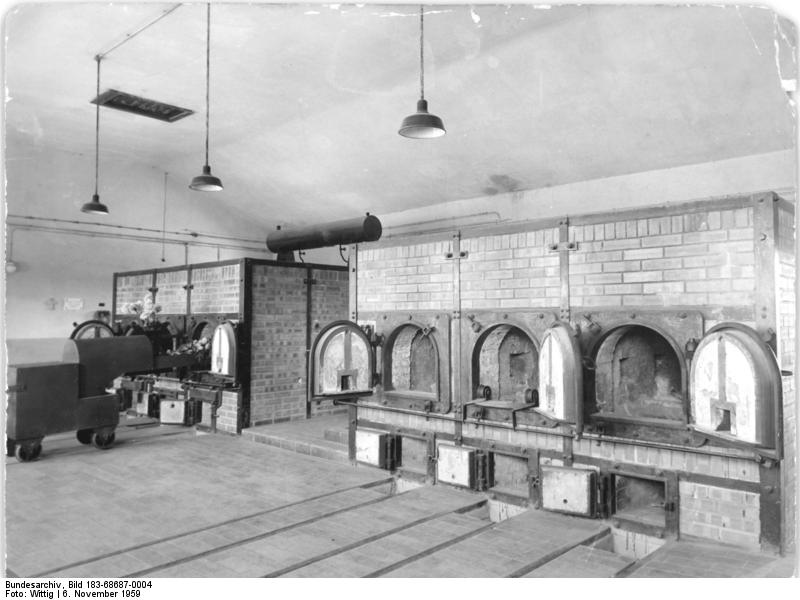 These are the offices of Topf and Sons, a proud local company noted for expertise in producing agricultural equipment for brewing and malting. Topf and Sons has been working with the Nazis since 17 May 1939, when engineer Kurt Prüfer produces a drawing for a mobile, oil-heated Topf cremation oven, securing the company’s first commission with the SS. The mobile ovens will be used to incinerate the growing number of bodies at concentration camps, including the nearby camp at Buchenwald. Although the initial order is for only three mobile ovens, the company has crossed its first and most important moral line in producing them. For the ovens are based on Kurt Prüfer’s design for a mobile waste incinerator intended only for animal use and which does not meet the strict technical requirements necessary for human cremation chambers. According to German regulations, when incinerating a human body it should never come into direct contact with flames, it must instead be cremated in super-heated air. By late 1941, Topf and Sons have produced mobile and static single and double-muffle ovens for four Nazi concentration camps, and have designed a new series of triple-

muffle ovens to meet the demands of the SS at Auschwitz, where Nazi administrators calculate that Soviet prisoners will die at a rate of 1,000 per day.

(The  muffle  is the incineration  chamber, a double-muffle oven would have a source of fire for each chamber, but Prüfer’s design for a triple-muffle oven broke convention by using only two sources of fire for the external chambers, and allowing the flames to burn the body in the central chamber by passing through gaps in the walls.)

It is work that the company appears to be proud of: instead of recoiling from the immediately apparent nature of these horrors, company director Ernst Wolfgang Topf writes to the SS at Auschwitz on 4 November 1941 to explain that the new design will ‘improve efficiency’, even taking into account the higher fuel consumption of ‘frozen’ corpses. ‘Rest assured,’ Ernst Wolfgang writes, ‘we shall supply an appropriate and well-functioning system, and we commend ourselves to you with a Heil Hitler.’ So proud are they of their work that Kurt Prüfer takes the opportunity a month later, on 6 December, to write to Ernst Wolfgang and Ludwig Topf demanding more money for his design: ‘It was I who worked out how to create the three- and eight-muffle cremation ovens, mostly in my free time,’ he boasts, ‘These ovens are truly ground-breaking, and may I assume that you will grant me a bonus for the work I have done.’

This staggeringly inhumane debate seems a far cry from the origins of J. A. Topf and Sons, founded in Erfurt sixty years earlier, in 1878, by master brewer Johann Andreas Topf. Yet the company was marked from the beginning with some of the same characteristics of technical innovation, unsteady business fortunes, and a strain of mental instability in its founders.

KAREN BARTLETT is a writer and journalist based in London. She has written extensively for the Sunday Times, The Times, The Guardian, and WIRED from Africa, India, and the US, and has presented and produced for BBC Radio. Most recently, she worked with Eva Schloss, writing her Sunday Times bestselling autobiography After Auschwitz: A Story of Heartbreak and Survival by the Stepsister of Anne Frank.

The post The Family Behind the Holocaust Cremation Ovens appeared first on The History Reader.