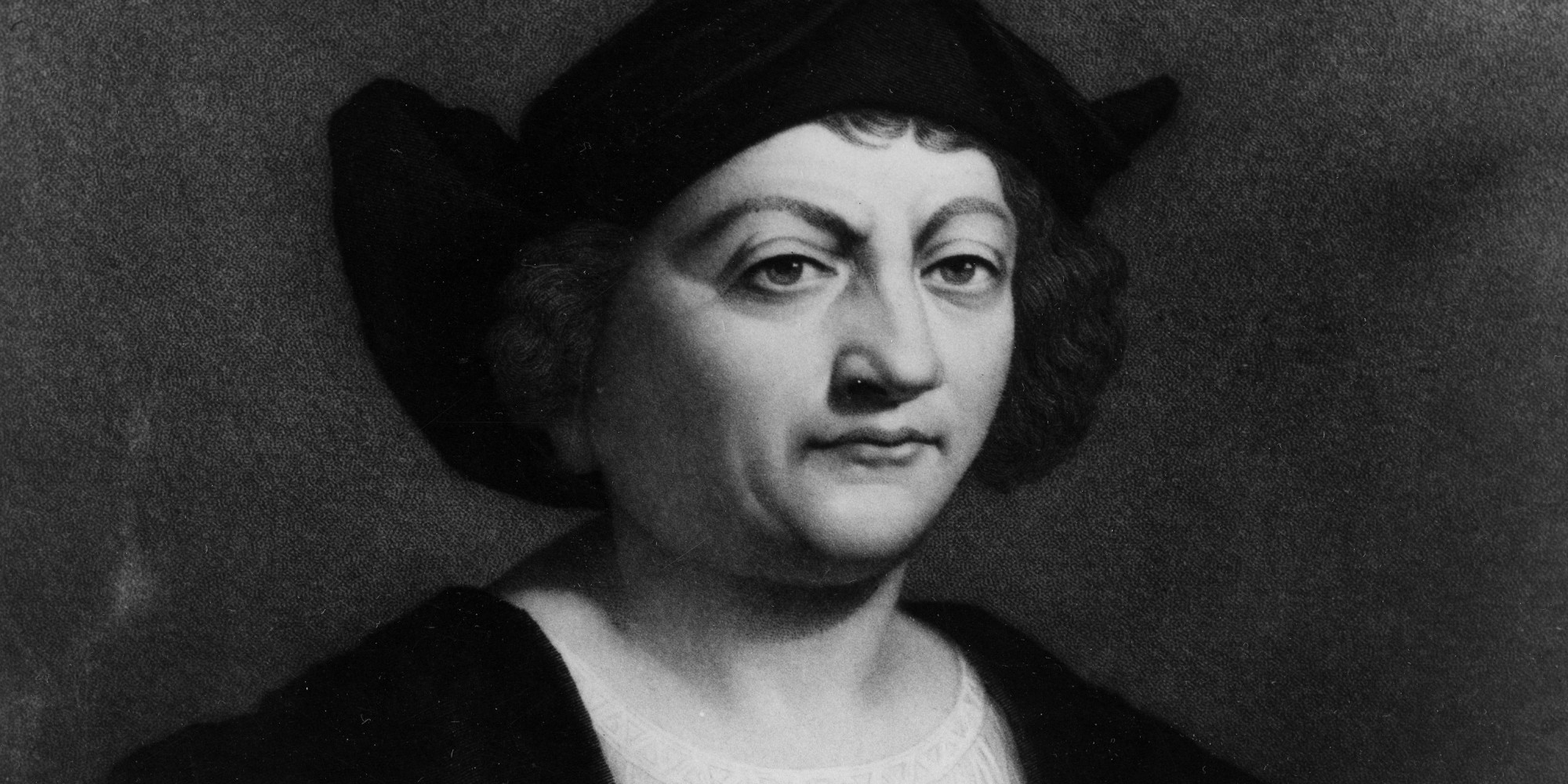 Every year I get quite enraged when this holiday comes around. So here is an article, much more well written than I could hope to accomplish that explains what really happened. The article below mentions replacing Columbus day with something else. It does not mention the counter holiday to Columbus day: Indigenous Peoples’ Day which I really hope gains some more traction. 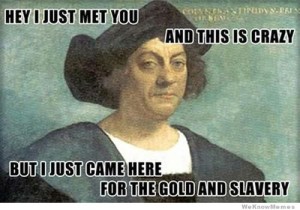 Once again, it’s time to celebrate Columbus Day. Yet, the stunning truth is: IfChristopher Columbus were alive today, he would be put on trial for crimes against humanity. Columbus’ reign of terror, as documented by noted historians, was so bloody, his legacy so unspeakably cruel, that Columbus makes a modern villain like Saddam Hussein look like a pale codfish.

Question: Why do we honor a man who, if he were alive today, would almost certainly be sitting on Death Row awaiting execution?

If you’d like to know the true story about Christopher Columbus, please read on. But I warn you, it’s not for the faint of heart.

Here’s the basics. On the second Monday in October each year, we celebrate Columbus Day (this year, it’s on October 11th). We teach our school kids a cute little song that goes: “In 1492, Columbus sailed the ocean blue.” It’s an American tradition, as American as pizza pie. Or is it? Surprisingly, the true story of Christopher Columbus has very little in common with the myth we all learned in school.

Columbus Day, as we know it in the United States, was invented by the Knights of Columbus, a Catholic fraternal service organization. Back in the 1930s, they were looking for a Catholic hero as a role-model their kids could look up to. In 1934, as a result of lobbying by the Knights of Columbus, Congress and President Franklin Roosevelt signed Columbus Day into law as a federal holiday to honor this courageous explorer. Or so we thought.

There are several problems with this. First of all, Columbus wasn’t the first European to discover America. As we all know, the Viking, Leif Ericson probably founded a Norse village on Newfoundland some 500 years earlier. So, hat’s off to Leif. But if you think about it, the whole concept of discovering America is, well, arrogant. After all, the Native Americans discovered North America about 14,000 years before Columbus was even born! Surprisingly, DNA evidence now suggests that courageous Polynesian adventurers sailed dugout canoes across the Pacific and settled in South America long before the Vikings.

Second, Columbus wasn’t a hero. When he set foot on that sandy beach in the Bahamas on October 12, 1492, Columbus discovered that the islands were inhabited by friendly, peaceful people called the Lucayans, Taínos and Arawaks. Writing in his diary, Columbus said they were a handsome, smart and kind people. He noted that the gentle Arawaks were remarkable for their hospitality. “They offered to share with anyone and when you ask for something, they never say no,” he said. The Arawaks had no weapons; their society had neither criminals, prisons nor prisoners. They were so kind-hearted that Columbus noted in his diary that on the day the Santa Maria was shipwrecked, the Arawaks labored for hours to save his crew and cargo. The native people were so honest that not one thing was missing.

Columbus was so impressed with the hard work of these gentle islanders, that he immediately seized their land for Spain and enslaved them to work in his brutal gold mines. Within only two years, 125,000 (half of the population) of the original natives on the island were dead.

Shockingly, Columbus supervised the selling of native girls into sexual slavery. Young girls of the ages 9 to 10 were the most desired by his men. In 1500, Columbus casually wrote about it in his log. He said: “A hundred castellanoes are as easily obtained for a woman as for a farm, and it is very general and there are plenty of dealers who go about looking for girls; those from nine to ten are now in demand.”

He forced these peaceful natives work in his gold mines until they died of exhaustion. If an “Indian” worker did not deliver his full quota of gold dust by Columbus’ deadline, soldiers would cut off the man’s hands and tie them around his neck to send a message. Slavery was so intolerable for these sweet, gentle island people that at one point, 100 of them committed mass suicide. Catholic law forbade the enslavement of Christians, but Columbus solved this problem. He simply refused to baptize the native people of Hispaniola.

On his second trip to the New World, Columbus brought cannons and attack dogs. If a native resisted slavery, he would cut off a nose or an ear. If slaves tried to escape, Columbus had them burned alive. Other times, he sent attack dogs to hunt them down, and the dogs would tear off the arms and legs of the screaming natives while they were still alive. If the Spaniards ran short of meat to feed the dogs, Arawak babies were killed for dog food.

Columbus’ acts of cruelty were so unspeakable and so legendary – even in his own day – that Governor Francisco De Bobadilla arrested Columbus and his two brothers, slapped them into chains, and shipped them off to Spain to answer for their crimes against the Arawaks. But the King and Queen of Spain, their treasury filling up with gold, pardoned Columbus and let him go free.

One of Columbus’ men, Bartolome De Las Casas, was so mortified by Columbus’ brutal atrocities against the native peoples, that he quit working for Columbus and became a Catholic priest. He described how the Spaniards under Columbus’ command cut off the legs of children who ran from them, to test the sharpness of their blades. According to De Las Casas, the men made bets as to who, with one sweep of his sword, could cut a person in half. He says that Columbus’ men poured people full of boiling soap. In a single day, De Las Casas was an eye witness as the Spanish soldiers dismembered, beheaded, or raped 3000 native people. “Such inhumanities and barbarisms were committed in my sight as no age can parallel,” De Las Casas wrote. “My eyes have seen these acts so foreign to human nature that now I tremble as I write.”

De Las Casas spent the rest of his life trying to protect the helpless native people. But after a while, there were no more natives to protect. Experts generally agree that before 1492, the population on the island of Hispaniola probably numbered above 3 million. Within 20 years of Spanish arrival, it was reduced to only 60,000. Within 50 years, not a single original native inhabitant could be found.

In 1516, Spanish historian Peter Martyr wrote: “… a ship without compass, chart, or guide, but only following the trail of dead Indians who had been thrown from the ships could find its way from the Bahamas to Hispaniola.”

Christopher Columbus derived most of his income from slavery, De Las Casas noted. In fact, Columbus was the first slave trader in the Americas. As the native slaves died off, they were replaced with black slaves. Columbus’ son became the first African slave trader in 1505.

Are you surprised you never learned about any of this in school? I am too. Why do we have this extraordinary gap in our American ethos? Columbus himself kept detailed diaries, as did some of his men including De Las Casas and Michele de Cuneo. (If you don’t believe me, just Google the words Columbus, sex slave, and gold mine.)

Columbus’ reign of terror is one of the darkest chapters in our history. The REAL question is: Why do we celebrate a holiday in honor of this man? (Take three deep breaths. If you’re like me, your stomach is heaving at this point. I’m sorry. Sometimes the truth hurts. That said, I’d like to turn in a more positive direction.)

Call me crazy, but I think holidays ought to honor people who are worthy of our admiration, true heroes who are positive role models for our children. If we’re looking for heroes we can truly admire, I’d like to offer a few candidates. Foremost among them are school kids.

Let me tell you about some school kids who are changing the world. I think they are worthy of a holiday. My friend Nan Peterson is the director of the Blake School, a K-12 school in Minnesota. She recently visited Kenya. Nan says there are 33 million people in Kenya… and 11 million of them are orphans! Can you imagine that? She went to Kibera, the slum outside Nairobi, and a boy walked up to her and handed her a baby. He said: My father died. My mother died… and I’m not feeling so good myself. Here, take my sister. If I die, they will throw her into the street to die.

There are so many orphans in Kenya, the baby girls are throwaways!

Nan visited an orphanage for girls. The girls were starving to death. They had one old cow that only gave one cup of milk a day. So each girl only got ONE TEASPOON of milk a day!

After this heartbreaking experience, Nan went home to her school in Minnesota and asked the kids… what can we do? The kids got the idea to make homemade paper andsell it to buy a cow. So they made a bunch of paper, and sold the paper, and when they were done they had enough money to buy… FOUR COWS! And enough food to feed all of the cows for ONE FULL YEAR! These are kids… from 6 years old to 18… saving the lives of kids halfway around the world. And I thought: If a 6-year-old could do that… what could I do?

At Casady School in Oklahoma City, Oklahoma, seemingly “average” school kids raised $20,000 to dig clean water wells for children in Ethiopia. These kids are heroes. Why don’t we celebrate “Kids Who Are Changing the Planet” Day?

Let me ask you a question: Would we celebrate Columbus Day if the story of Christopher Columbus were told from the point-of-view of his victims? No way!

The truth about Columbus is going to be a hard pill for some folks to swallow. Please, don’t think I’m picking on Catholics. All the Catholics I know are wonderful people. I don’t want to take away their holiday or their hero. But if we’re looking for a Catholic our kids can admire, the Catholic church has many, many amazing people we could name a holiday after. How about Mother Teresa day? Or St. Francis of Assisi day? Or Betty Williams day (another Catholic Nobel Peace Prize winner). These men and women are truly heroes of peace, not just for Catholics, but for all of us.

Let’s come clean. Let’s tell the truth about Christopher Columbus. Let’s boycott this outrageous holiday because it honors a mass murderer. If we skip the cute song about “In 1492 Columbus sailed the ocean blue,” I don’t think our first graders will miss it much, do you? True, Columbus’ brutal treatment of peaceful Native Americans was so horrific… maybe we should hide the truth about Columbus until our kids reach at least High School age. Let’s teach it to them about the same time we tell them about the Nazi death camps.

While we’re at it, let’s rewrite our history books. From now on, instead of glorifying the exploits of mass murderers like Alexander the Great, Julius Caesar, Genghis Khan, and Napoleon Bonaparte, let’s teach our kids about true heroes, men and women of courage and kindness who devoted their lives to the good of others. There’s a long list, starting with Florence Nightingale, Mahatma Gandhi, Rev. Martin Luther King, and John F. Kennedy.

These people were not adventurers who “discovered” an island in the Caribbean. They were noble souls who discovered what is best in the human spirit.

Why don’t we create a holiday to replace Columbus Day?