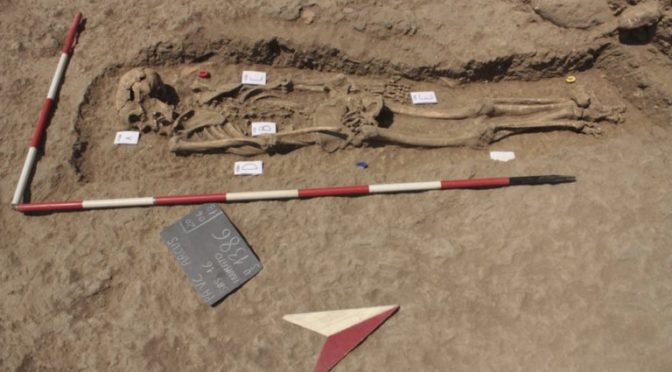 The remains of an adult male were discovered in 2013 in Piazza Armerina, a medieval village in central Sicily that was built over the ruins of a Roman latifundia, one of the immense agricultural estates that Sicily was largely divided into by the 2nd century. The body was isolated, not part of a cemetery or burial ground. As a matter of fact, the remains weren’t even in or near a settlement as they date to the between the first and second half of the 11th century, a time when the area was still unpopulated. The village’s first appearance on the historical record dates to 1122.

The skeleton was buried face down in a shallow grave in a southwest to northeast orientation. The right arm was extended along the side of the body. The left arm was extended over the back; the ulna was found resting on the left pelvis. The feet were so close together that it’s highly likely they were tied. There were no funerary objects found in the pit.

The isolation, orientation and position of the body mark it as a deviant or atypical burial that it not in concert with Christian, Jewish or Muslim funerary practices. The skeleton is almost complete and in excellent condition, allowing researchers to study this unique burial in detail using a combination of osteoarchaeological analysis, forensic anthropology techniques and technology to study the remains.

They identified six stab wounds on the sternum with the shape of the blade tip impressed on the bone. The weapon appears to have been a single-edged knife or dagger, a close-combat blade that nonetheless managed to pierce the thorax and penetrate the posterior sternum from entry points on the victim’s back. A large bone fragment on the right side of the sternum was dislodged when the blade was twisted with significant force.

To get an accurate picture of the dynamics of this fatal stabbing, researchers used 3D modeling technology. They created a virtual model of the chest, the entry points and angles of penetration. They were steep, indicating the assailant was standing behind the kneeling victim. As the blade went through the thorax into the breastbone, it probably punctured his lung and heart, killing him quickly.

The injury pattern is unique. There is nothing like it known in the archaeological record. It is not the result of hand-to-hand combat. There is no evidence of contact anywhere else on the victim’s chest, which almost certainly would have been present during the chaos of a fight.

There was no evidence of other injuries on the man’s vertebrae or ribs that would suggest that the man was involved in some kind of “uncontrolled” fight, said lead author Roberto Miccichè, an archaeologist at the University of Palermo in Italy.

The goal of the man’s killer, it seems, was to attack the victim in a “very effective and rapid way,” Miccichè said; in addition, the assailant likely knew human anatomy “very well.” In fact, the cuts were so clean and smooth, that the man may have been immobilized, perhaps with binding, Miccichè said.

The clear, deep stab wounds, the lack of defensive, uncontrolled action, the evidence of binding, particularly in the closeness of the feet, and the relative positions of aggressor and victim indicate this was an execution.

It is also the first thoroughly documented, archaeologically excavated deviant burial found in Sicily. A number of atypical burials have been recorded by archaeologists on the Italian mainland, but only one appears in the scientific literature for Sicily and it was not well-documented. Atypical burials are believed to have been employed for religious or magical reasons — like to prevent the dead from rising to harm the living — or as a form of post-mortem ostracism, a reflection of the deceased’s marginal position in the social order.

Researchers believe this death occurred in the aftermath of the Norman conquest of Sicily in 1061. It was a period of turmoil, of social and political realignment as the island transitioned from Islamic to Norman rule.